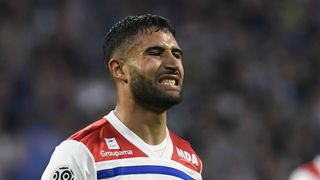 Nabil Fekir's future will not be decided until after the World Cup, according to Lyon president Jean-Michel Aulas.

The France international has been strongly linked with a move to Liverpool, their new signing Fabinho calling on the forward to join him at Anfield.

A fee of £60million has been mooted for the 24-year-old, who scored 18 Ligue 1 goals in the 2017-18 campaign, but Aulas denied a deal with Liverpool is close for Fekir.

"The transfer is at a standstill, there is no way forward," Aulas said.

"The deal will certainly not close during the World Cup and I do not think there is any change before the World Cup.

"We have not set a base price because we have not discussed this yet."

Having completed moves for Fabinho and RB Leipzig midfielder Naby Keita, Liverpool have also been linked with Xherdan Shaqiri after the Switzerland star was relegated with Stoke City.