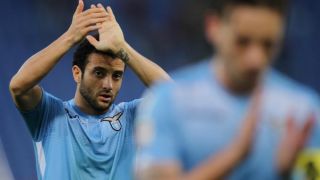 Felipe Anderson has fuelled speculation surrounding his future, stating he is unsure of whether Lazio will off-load him in the January transfer window.

The 22-year-old is the subject of intense rumours regarding a move to the Premier League, with Manchester United reported to be interested in the Brazilian.

Lazio's sporting director Igli Tare revealed to Sport Mediaset that United had a €50 million bid for Felipe Anderson rejected in the close season.

The rejection sent a clear message that anyone willing to prize the attacking midfielder away will have to spend big money.

However, Felipe Anderson said he had no idea what the immediate future may hold, and that all he can do is focus on performing for Lazio.

"I do not know if I will stay in January," he told Sky Italia. "I am concentrated only on my work and doing well here.

"I do not know what will happen."

Felipe Anderson scored a stoppage-time goal as a second-half substitute in Lazio's 3-1 win over Fiorentina in Serie A on Saturday.

"Against Fiorentina was a difficult game, we could not play our game," he said. "At San Siro [2-1 win over league leaders Inter in December] we proved our worth and today we did it again for all 90 minutes.

"It was a present for our fans. But we have to work even harder, and we are focused on this. I want to improve my form and have patience, even from the bench."

Lazio are ninth in the league table, 12 points behind Inter.