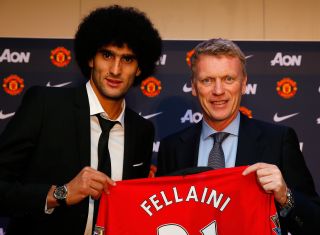 The Belgium international joined the club on the final day of the transfer window from Everton in a deal believed to be in the region of £27.5 million.

Fellaini admitted that at one stage, though, he feared the transfer may not be completed.

"With Everton and the chairman, we never knew about the deal," he told the media at his first press conference as a United player on Friday.

"Sometimes I thought there was no chance (of the transfer happening) but in the end I was so happy to join United.

"I talked with the manager because it was a big opportunity to join one of the biggest clubs in the world.

"I came here to win trophies.

"For me it's a dream to join the biggest club in the world."

Fellaini's arrival provided United fans with the big-name signing they craved, with Moyes having previously been linked during the close-season with failed bids for Cesc Fabregas and Thiago Alcantara.

Given the calibre of player already at the club, the 25-year-old is under no illusions about the size of the challenge that awaits him at Old Trafford - and he knows he faces a difficult job to nail down a regular place.

"I need to work hard," Fellaini continued. "There are a lot of good players. I need to show my ability, but I'll keep focused.

"I want to help the team and give everything.

"United are a big team with big players but Everton were a great team too. The difference is United have won trophies."

For his part, Moyes believes that Fellaini offers a new dimension to his squad, insisting that the tall playmaker - who he signed for Everton from Standard Liege in 2008 - can become a key figure for the club.

"I'm hoping he can continue to improve, as he has done in the early part of his career, at United and we can have a really top player on our hands."

However, Moyes did admit that his initial plan was to make Fellaini part of a double swoop on Everton, with the Scot ultimately frustrated in his joint pursuit of England full-back Leighton Baines.

"He (Fellaini) was always one that was out there. We talked about it a lot and thankfully we got him here," he added.

"We chose to do it that way because we wanted to get Leighton Baines. We didn't want to give up on Baines until the last minute and thought that was the best way to do it, to keep the deals together and only split it at the last minute.

"I think when you get to that final day, it is always a doubt things could easily have gone wrong, but in the end it didn't and we're thankful we've got him (Fellaini)."