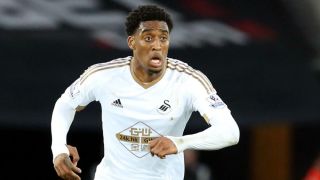 Leroy Fer has made his move to Swansea City from QPR a permanent one, agreeing terms on a three-year deal.

The Netherlands international joined the Swans on loan in February, making 11 appearances to help guide the club away from the Premier League relegation battle.

Fer, who scored eight goals in 50 outings for QPR, becomes Swansea's first signing of the close-season.

BREAKING NEWS: We are delighted to confirm the signing of from . July 5, 2016

Swansea boss Francesco Guidolin described Fer's contribution last season as a "good surprise" and the midfielder expressed his delight to be back at the Liberty Stadium.

"He said that to me also," Fer told the club's official website. "He was really happy with how I gelled with the team and he said that I did very, very good.

"He said he was surprised because he didn't know much about me. But I said to him that I just wanted to prove myself.

"At the end of the season he said he wanted to keep me here and when the coach wants you, that makes it easy.

"I am very happy to be back. From the first moment I came here, I felt at home.

"The boys were good to me and they made it very easy for me. I am very happy to sign for Swansea and I hope to do my best and be important for the team."