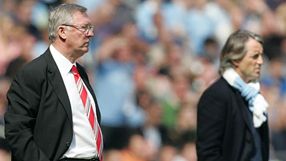 "They are our direct opponents now. Manchester City are up against us to win titles. That is what our focus is on, the team who can stop us winning," he told reporters on Thursday.

"We have to get used to playing Manchester City in important games. They are not going away.

"The support they have means we are going to be playing them in a lot of big games - finals maybe. We already have done in semi-finals and an important cup tie this season.

"If we are going to be contesting for league titles regularly - and I think we will be doing - it will become just as important as the Liverpool game.

"Maybe not in terms of emotion but there is certainly an importance which, at this moment in time, supercedes the Liverpool games.

United will go all out to win at City even though a draw would be a good result for the visitors, Ferguson added.

United go into Monday's game at the Etihad Stadium three points ahead of their neighbours at the top of the table with three matches left in the season.

"We know the exact situation we're in. We're in a better position than Manchester City," Ferguson told a news conference.

"We could come out with two good results whereas they only have one. Although you know my attitude and this club's attitude - we'll be trying to win."

Ferguson, seeking his 13th Premier League title with United, said he trusted his players to perform in such a high pressure game.

"I think there's enough experience. Patrice Evra, Rio Ferdinand, even Wayne Rooney has amassed a lot of football in his short time in the game," he said.

"Michael Carrick as well. There's enough experience in the camp to cope with this situation."

City humbled United 6-1 at Old Trafford in their first league meeting this season but the champions knocked their local rivals out of the FA Cup with a 3-2 victory at the Etihad Stadium.

"I think the previous encounters this season are irrelevant," Ferguson said.

"We've already met three times but the past is the past," added Ferguson referring to United's victory in the pre-season Community Shield match. "It doesn't matter. It's all down to Monday."

Ferguson tried to play down the inevitable hype surrounding the match, with City bidding to win the title for the first time since 1968.

"I suppose when the fixture came out at the beginning of the season all the roads pointed to this game," Ferguson said.

"It was inevitable maybe. But we are where we are and it doesn't matter what's happened before, who's dropped points or who hasn't dropped points. It really is all down to this game.

"It will be a fantastic atmosphere and I hope it lives up to the billing."