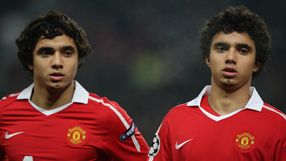 The 20-year-old Brazilian right-back was sent off for a second yellow card in Sunday's 0-0 draw at Tottenham Hotspur and is suspended for Saturday's home game against Birmingham City.

He was fined 8,000 pounds and warned as to his future conduct by the English FA on Friday for the way he reacted to his dismissal at White Hart Lane by referee Mike Dean.

Ferguson has several options for filling the right-back spot, including switching left-back Fabio to the other side, as the league leaders look to extened their unbeaten league record to 22 matches this season against the struggling midlands side.

"Young Fabio could easily play right-back, John O'Shea and Wes Brown are back in training... they are available," said Ferguson.

"I might play Rafa and they wouldn't know - I could do that quite easily! So it's not really a suspension at all," he joked.

Asked if his bluff might not be called with a DNA test, he replied with a smile: "They are probably the same."

United are boosted by the return of midfielder Paul Scholes who has a good chance of playing after injury sidelined him for the last 10 matches.

Scholes returned to the bench against Spurs last week and Ferguson said: "He definitely comes into consideration tomorrow."

"I was going to put him on against Tottenham until Rafa got sent off. It's good to have him back. He's had a little break, which knowing Paul's history over the years when he's had a bad injury and come back he's always been nice and fresh so that's good news for us."

Rafael was due to have a personal hearing with the FA on Friday with Ferguson saying of the dismissal: "everyone knows it was a bad decision."

United have a rare kick-off at the traditional Saturday 3pm time and Ferguson is hoping for more goals than in their last five matches against Birmingham which have ended 1-0 or 1-1.

"In the Birmingham games over the last few years there have never been a lot of goals, hopefully we can change that trend," he said.

"I think our home form has been very very good this season and it has to be now, it's kicking on time."