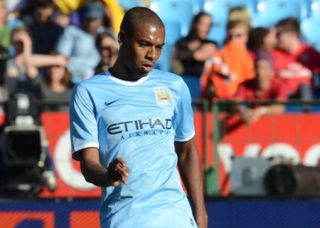 The Brazilian midfielder is one of four new signings to arrive at the Etihad Stadium ahead of the new campaign, and he has impressed in his opening pre-season outings for the club.

Having won six titles in eight years at previous club Shakhtar Donetsk, he knows what it takes to challenge for trophies - and he believes that City must start quickly if they are to rival Manchester United to this season's Premier League crown.

"It is important to start strong," he said ahead of the club's opener against Newcastle on August 19. "We need to get as many points as possible in those first few games.

"It is not a question of thinking about United, we have to think about ourselves."

City will be hoping to challenge on several fronts this season, with the UEFA Champions League likely to be high on their list of priorities.

They have dropped out of that competition at the group stage in the last two seasons, and Fernandinho recognises the importance of a solid foundation before the fixture list intensifies.

"It is important before the Champions League starts in mid-September to get as many points as possible," he added. "Because after that we are playing Saturday-midweek all the time and it gets harder."