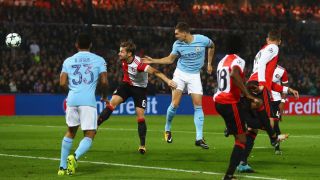 The Dutch champions ended a 15-year absence from the group stages of Europe's premier competition but they were behind after 95 seconds when John Stones capitalised on poor set-piece defending.

England centre-back Stones helped himself to an unlikely brace after half-time, by which time goals from the more familiar sources of Sergio Aguero and Gabriel Jesus had ended the game as a contest before the half hour.

Ederson lined up in goal for City, sporting protective headwear following his painful clash with Sadio Mane in the 5-0 thrashing of Liverpool four days ago.

The Brazilian's match fitness was barely put to the test, with Feyenoord entirely overmatched against opponents brimming with confidence following their unbeaten start to the Premier League season.

The pre-match flare smoke had barely cleared by the time Stones rose to meet David Silva's delivery from a short corner and his header squirmed through Tonny Vilhena's limp defensive efforts on line.

Feyenoord centre-back Eric Botteghin turned in far better work in his own goalmouth when he nodded Jesus's dipping header to safety, but City had a two-goal cushion in the 10th minute.

Aguero was involved at the start of a slick move that included David Silva and Bernardo Silva, who released Kyle Walker down the right and the Argentina striker was on hand to flash a finish across Brad Jones.

Feyenoord goalkeeper Jones then thwarted Aguero at his near post before Michiel Kramer fired into the side-netting on a rare attack from the hosts.

City made it 3-0 in the 25th minute when Jones parried Benjamin Mendy's drive from a half-cleared corner. Nicolas Otamendi was standing in an offside position, unlike Jesus, who benefitted from Jones and his defence standing with their arms aloft and smashed into an unguarded net.

A sliding Aguero almost squeezed in a fourth at the near post from a dangerous Kevin De Bruyne centre and the Belgium midfielder was one of those in sky blue singled out for robust treatment as Feyenoord trio Jeremiah St Juste, Kramer and Vilhena earned bookings within three minutes of one another at the end of a nightmare half for Giovanni van Bronckhorst's men.

There was a more sedate opening to the second half, with Feyenoord's fans remaining in good enough spirits to "ole" any prolonged sequence of passes from their team.

In truth, there were precious few of those and Stones was granted a generous amount of room six yards from goal to power in his second from De Bruyne's 63rd-minute short corner.

By that stage, Pep Guardiola's team, were tapering down with an eye on Saturday's trip to Watford.

Jones saved smartly from Raheem Sterling and St Juste blocked from another City substitute, Leroy Sane, during the closing stages, either side of Feyenoord replacement Jens Toornstra ballooning a promising free-kick over to sum up his team's grim outing.