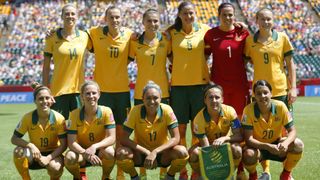 The Matildas were due to play world champions USA on September 17 and 20 but the players' decision to go on strike this week instead of take part in a training camp in Sydney led to Thursday's announcement from FFA.

Along with the Socceroos and A-League players, the Matildas - under the umbrella of Professional Footballers Australia (PFA) - want an improved collective bargaining agreement (CBA) but have been unable to reach a settlement with FFA.

Speaking in Sydney on Thursday, FFA CEO David Gallop confirmed the Matildas' tour of USA would not go ahead.

"Sadly, the Matildas will not be playing the USA because FFA and the A-League clubs can't meet the PFA's unaffordable demands in relation to the level of the salary cap for A-League players," he said.

"This is a competition in which the clubs lost a collective 17 million [Australian dollars] last season.

"What we have today is an extraordinary situation in which the two male playing groups in the Socceroos and A-League continue to be paid by FFA and A-League clubs, but the female players aren't being paid. This could have been fixed today if the PFA had accepted the interim deal.

"The Matildas alone are the ones being directly affected as a result of the whole of game CBA talks not being resolved."

According to FFA, PFA rejected an interim deal at "increased pay rates", claiming the Matildas would not tour without a "$30million four-year CBA" to cover all professional footballers being agreed.

The CBA negotiations are threatening the start of the 2015-16 A-League, slated for October 8, with both FFA and PFA trading punches through the media with wildly different claims about who is at fault.

Matildas striker Ashleigh Sykes revealed, however, that some of the women's squad have not been paid for two months, while she rejected the claim that the male players were using her and her team-mates' justified demands for improved conditions to get a better pay deal for themselves.

The Matildas want their overall payment pool to be increased by 150,000 Australian dollars to "a maximum of 43,000 dollars per annum per top-tier contracted player", according to Sykes.

"We simply don't think that what is on the table is sufficient for us to move forward," she told ABC Radio.