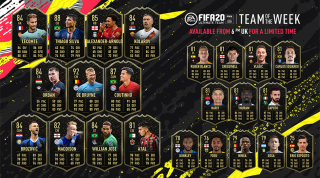 EA Sports have announced the players who have been included in the FUT Team Of The Week 2, following the latest round of matches.

Bayern Munich new boy Philippe Coutinho – named among FIFA 20's Ones to Watch on Wednesday – has made the cut after a fine display helping Bayern Munich tear apart Köln.

From the Premier League, Trent Alexander-Arnold and James Maddison are both in after star turns against Chelsea and Tottenham respectively. Kevin De Bruyne is also featured after Manchester City hammered Watford 8-0 at the Etihad Stadium.

Items (see below for full lot) will be available from 6pm for a limited time.