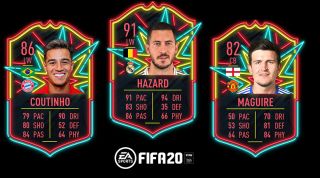 EA Sports has revealed its 23-strong Ones to Watch line-up for Ultimate Team, taking inspiration from another summer of major transfers.

Eden Hazard, Antoine Griezmann, Frenkie de Jong and Joao Felix are all in after their big La Liga moves, while Harry Maguire, Nicolas Pepe and Sebastian Haller are among those representing the Premier League.

You’ll be able to find them in packs from Friday (September 27), and these items will upgrade throughout the season based on their real-world performances.

FIFA 20 players also have their chance to vote for the final OTW player with a special player pick in-game or via the Companion App, and can choose between Eder Militao, Allan Saint-Maximin and Patrick Cutrone.