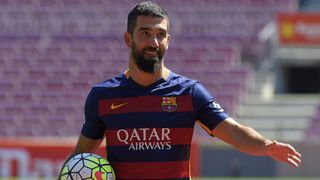 FIFA have rejected Barcelona’s request to bring forward Arda Turan's registration, according to reports in Spain.

Turan joined Barca during the close season from Atletico Madrid, despite the Liga champions being under a transfer ban for breaching rules relating to registering youth players.

Under the sanctions, Barcelona are not allowed to field Turan until the ban expires on January 4 but the club approached FIFA and the Spanish Football Federation (RFEF) for an exemption this week in light of Rafinha suffering a cruciate knee ligament injury.

Turan's agent Ahmed Bulut said on Tuesday that he was "not optimistic" over Barcelona's prospects and sources including Spanish newspaper Marca said on Wednesday that FIFA had refused the request.

Barca could now take their case to the Court of Arbitration for Sport if they still wish to have Turan available before the new year.

Aleix Vidal, who joined Barcelona from Sevilla, is also prevented from representing his new club until January under the ruling.