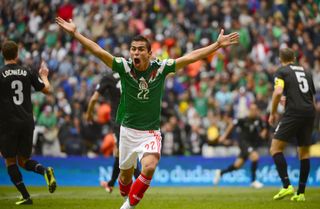 First-half strikes from Paul Aguilar and Raul Jimenez put the hosts in control, with Oribe Peralta's double and Rafael Marquez's effort extending their advantage after the interval.

New Zealand battled hard to stay in the game and added a late consolation through Chris James at the Estadio Azteca.

But the hosts, who enjoyed 75 per cent of the possession, will take a healthy advantage into next Wednesday's second leg in Wellington.

Coach Miguel Herrera's decision to select national-based players only, leaving the likes of Javier Hernandez and Carlos Vela out, meant there were seven changes for Mexico from the side beaten by Costa Rica in their final qualifier.

The visitors made three changes from their goalless draw with Trinidad and Tobago last month, with Leicester City striker Chris Wood chosen to lead the attack.

After a cautious start to the match from both sides it was Mexico who slowly began to exert some pressure, and eventually they carved out some good chances.

In the 18th minute the hosts thought they had scored when Jimenez hooked a shot towards goal only for Glen Moss to punch clear on the line.

Moss continued to thwart Mexico's attacks with saves from Francisco Rodriguez and Jimenez, but he was at fault for the opening goal in the 32nd minute.

The goalkeeper failed to claim a cross from the right, and in the confusion Aguilar pounced on the loose ball to net his third international goal.

Mexico doubled their lead five minutes before the break when Jimenez found the back of the net with a close-range header.

Peralta capped a flowing counter-attack to increase their advantage in the 48th minute.

Miguel Layun raced clear down the left and rolled a low cross to Peralta and he slid in to tap home.

Richard Herbert made three changes for the visitors in an attempt to stop the Mexican charge, and the visitors did begin to have more possession but they lacked an attacking threat.

Peralta doubled his tally with a powerful header from a Layun cross with 10 minutes to play, and Marquez seemingly wrapped the tie up three minutes later with a simple headed finish.

The visitors had some cause for cheer, though, as James netted an acrobatic volley from a Rory Fallon knock-down with five minutes left.