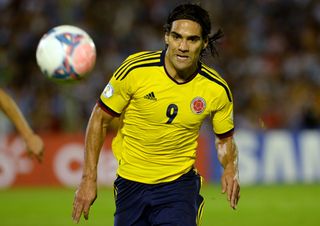 A win for either side will guarantee their participation in Brazil in 2014, with fourth place Ecuador set to play Uruguay who are fifth.

Jose Pekerman's Colombia side have already let one opportunity to qualify slip, after they fell to a 2-0 defeat to Uruguay in Montevideo in September.

Strikes from Edinson Cavani and Christian Stuani ensured Colombia would be made to sweat on their progress.

They will pin their hopes of qualification on in-form of Monaco striker Radamel Falcao.

The 27-year-old is fourth on the goalscoring charts with seven goals from 14 matches, while River Plate forward Teofilo Gutierrez will also be crucial.

Colombia have not qualified for a World Cup since France 1998, and midfielder Alexander Mejia urged the squad to up the intensity ahead of a difficult Chile challenge.

"We know that the opportunity is very near to reach the World Cup after many years," he said. "This week you have to work harder, be more focused, because we know that Chile has a strong group and a great coach."

Jorge Sampaoli's Chile side have won their last four qualifying fixtures to give themselves a great chance of qualifying.

That arrested a run of four consecutive defeats in the South American section, and they put in a superb display in their 3-0 triumph over Venezuela in September.

Manchester United youngster Angelo Henriquez is not included in Sampaoli's squad, despite scoring four goals in five appearances for Real Zaragoza, where he is currently on loan.

Ahead of the match Sampaoli says his squad are determined to reach Brazil with victory against Colombia.

"The game will be hard," he said. But we are on the verge of qualifying so we have to be committed. The boys are eager to get there."