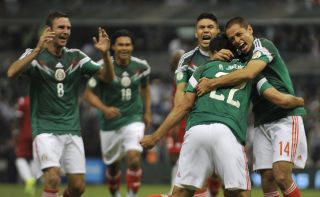 Mexico are now in pole position for a spot in the intercontinental play-off with New Zealand in November, but appear unlikely to overhaul third-placed Honduras and seal automatic qualification.

Vucetich's side would need three points against Costa Rica, a victory for bottom-placed Jamaica over Honduras and a two-goal swing in their favour to finish third.

The visitors should take confidence from their success over Panama, but face a tough opponent in Costa Rica, who suffered only their second defeat of the final round of qualification in Honduras three days ago.

Jorge Luis Pinto's Costa Rica - who have already ensured their place at next year's finals - have also not lost at home since September 2012.

It was Mexico who triumphed on that day as they ran out 2-0 victors in the second round of qualification, but the hosts will be eager to exact revenge against a team they have not beaten since 2001.

Defeat for Mexico could allow Panama - who are three points behind in fifth ahead of their game with pool winners United States - to move into the play-off spot.

The onus will be on the likes of Javier Hernandez, who has scored five times in qualifying, and Raul Jimenez - scorer of the late winner against Panama - to help them avoid that scenario.

A draw will be enough for Mexico to wrap up their place in the play-off, but Vucetich's men will be determined to record successive victories for the first time since July in San Jose.