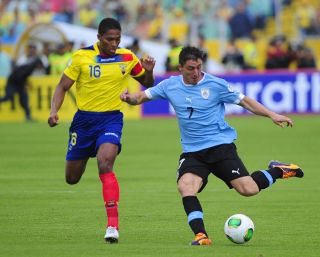 Jefferson Montero's goal on the half-hour mark at the Estadio Olimpico Atahualpa was all the hosts needed in Quito to earn the three points, and move one step closer to Brazil.

Second-half substitute Joao Rojas had all but sealed the result in the final 20 minutes, but his goal was controversially ruled out for offside despite seemingly being played on by two Uruguay defenders.

The Uruguayans remain in fifth spot in the group table - and must beat the already-qualified Argentina in the final game and arrest a four-goal differential on Chile to gain an automatic spot.

Oscar Tabarez's men are guaranteed of a least a playoff place, though, which would see them play off against Jordan in a two-leg contest in November.

Ecuador and Chile play one another in their final group game - and a draw would send both parties to next year's finals, while a result either way would leave the loser vulnerable to being overtaken by Uruguay.

A healthy Uruguay win over Argentina seems unlikely, however, given Tabarez's men lost 3-0 to them last time out.