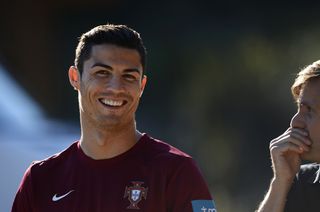 Paulo Bento's side are one point behind Russia, but the leaders will be expected to take maximum points from their final matches against Luxembourg and Azerbaijan.

Victory over Israel in Lisbon on Friday would at least ensure Portugal finish no lower than second, and they could still progress through the play-offs without overhauling Russia.

And captain Cristiano Ronaldo has called on his side to focus on their own job by recording victory over Israel and a further three points when they face Luxembourg.

"I am confident in the victory," he said. "They are two games we have to win, we are the favourites and we will get on the field and give the best to ensure the six points.

"We just have to win both games and see what Russia does."

Ronaldo does not want to consider the possibility of Portugal - World Cup semi-finalists in 2006 - failing to qualify for Brazil 2014.

"All players play in big clubs and know the responsibility of playing in the national team. Missing two games and not winning is not worth thinking about," the Real Madrid star added.

"We have the better team and we need to show that on the field; we have a great chance to win the game."

Portugal have not lost a competitive match since October 2012 and host Israel, who sit five points back in third, having won their last three matches.

In contrast, Israel’s last victory came back in March and they were beaten by Russia last time out.

The previous group meeting between Portugal and Israel saw the former come from 3-1 down to snatch a draw through Fabio Coentrao’s late equaliser.

Coentrao is suspended on this occasion along with Helder Postiga, while Bruno Alves, Joao Pereira, Miguel Lopes and Raul Meireles are all missing through injury.

Meireles' absence, due to a problem with his right thigh, was confirmed on Wednesday with Custodio called up as a replacement.

Israel coach Eli Guttmann also has a squad blighted by injuries and has chosen to recall Barak Yitzhaki and Eden Ben Basat. Dudu Aouate retains his place, but there is no room for ex-captain Yossi Benayoun.