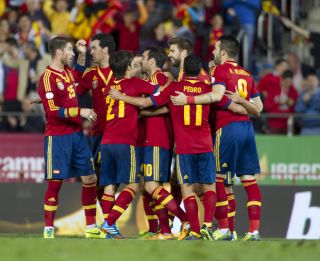 The world and European champions were made to work for the Group I victory, which came thanks to second-half strikes from Xavi and Alvaro Negredo; a result that leaves them on the verge of booking their place at next year's World Cup in Brazil.

Spain struggled to break down their opponents in the first half but took the lead in the 61st minute thanks to a superb Xavi strike.

Negredo, introduced as a second-half substitute for debutant Michu, then doubled Spain's lead with a terrific header, meaning Sergey Kornilenko's late effort was merely a consolation.

Vicente del Bosque's side now need just one point against Georgia in Albacete on Tuesday to confirm their place at the World Cup.

In the absence of the injured Fernando Torres and David Villa, Spain manager Del Bosque selected Swansea City's Michu from the start, while goalkeeper Iker Casillas and midfielder Andres Iniesta were named among the substitutes.

Belarus, who were without former Barcelona and Arsenal midfielder Alexander Hleb due to suspension, opted for a 3-5-2 formation as they sought to end their qualifying campaign on a good note.

Spain's top scorer in qualifying, Pedro, ran at the Belarus defence and caused problems early, while Michu failed to make the most of a David Silva ball before the latter nodded wide.

As expected, Spain controlled possession, but they struggled to create clear chances as Belarus were happy to sit back and soak up pressure.

The closest the hosts came in the first half was a curling Silva effort, but Belarus goalkeeper Aleksandr Gutor was equal to the task, while Michu headed a Nacho Monreal cross wide.

Belarus had claims for a spot-kick on the verge of half-time, with Stanislav Dragun's cross appearing to strike the hand of Gerard Pique – who had already been booked – but no penalty was given as both sides entered the break goalless.

A frustrated Del Bosque replaced Monreal with Iniesta at the break, before Michu's uninspiring debut came to a close in the 57th minute.

Spain took the lead just moments later, with Pique's effort in keeping an aimless ball alive at the byline crucial.

The Barcelona defender's hooked ball back in was not cleared properly, as Yegor Filipenko's header fell perfectly to Xavi, and the midfielder hit a bullet strike that left Gutor with no chance as Spain finally took the lead.

Negredo then added to Spain's lead with 12 minutes to play as he netted a superb diving header.

Pedro's flick freed Sergio Ramos down the right, and his inch-perfect cross was powerfully nodded home by the Manchester City forward.

A rare Belarus attack saw Sergei Kislyak force Victor Valdes into a rare save, while Kornilenko bagged a late left-footed strike to cap a swift counter, but Spain did just enough to post an important victory.