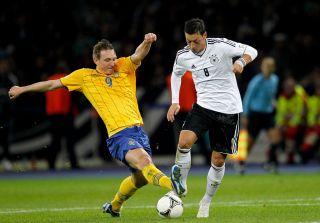 The only blip for Joachim Low's side in Group C came in a 4-4 draw with Erik Hamren's men in October 2012, after surrendering a 4-0 lead in Berlin.

Germany have won their other eight fixtures and comfortably qualified to next year's showpiece event in Brazil, with progression officially confirmed with a straightforward 3-0 triumph over Republic of Ireland on Friday.

Goals from Sami Khedira, Andre Schurrle and Mesut Ozil did the damage in Cologne.

Ozil has been influential throughout the qualifying campaign for Germany, notching seven goals in nine games, while Marco Reus has also aided the cause by netting five times.

Despite already confirming their World Cup place, Bayern Munich midfielder Bastian Schweinsteiger insists Germany will not lose focus ahead of the tournament.

"All our games from now on are about preparing for the World Cup," he said.

"We need to improve, develop and build confidence as a team."

With 20 points, Sweden have ensured they will finish second and now must wait to see if they have done enough to secure one of the eight best runners-up spots in order to contest the play-offs.

Victory in Solna on Tuesday will boost their chances, but it is an unenviable task, with Germany undefeated in World Cup qualifiers since their 5-1 humbling at home to England in September 2001.

However, Sweden have won their last five fixtures and will be buoyed by their 2-1 success over Austria on Friday.