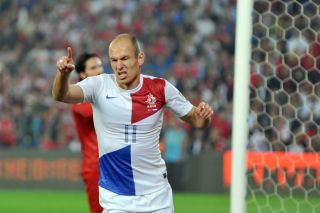 Goals from Arjen Robben and Wesley Sneijder secured their triumph and ended any hope Turkey had of making the play-offs.

Robben opened the scoring after eight minutes with a free-kick that beat everyone and caught out Volkan Demirel in the Turkey goal.

Despite plenty of home pressure, Turkey could not find the back of the net and Sneijder punished them with a second early in the second half to seal the points for a Netherlands side who will head to Brazil for next year's World Cup high in confidence after an undefeated qualification campaign.

Louis van Gaal made five changes to the side that convincingly beat Hungary on Friday with Leroy Fer, Jordy Clasie and Sneijder making up a brand new midfield.

There were two changes for Turkey as Gokhan Tore and Caner Erkin were replaced by Hasan Kaldirim and Olcan Adin.

With Turkey needing to win to give them second place in the group, their night got off to the worst possible start as the visitors took the lead in eight minute of the match.

Robben whipped in a free-kick from the right that evaded all the Netherlands players in the penalty area and left Demirel unable to reach it with his dive.

Things nearly got worse three minutes later as Robin van Persie thought he had doubled the lead only for his effort to be ruled out for offside. The Manchester United striker was played in by Robben and lifted the ball over Demirel only for the assistant to deny him.

Turkey began to work their way back into the game and a delicate flick from Mehmet Topal nearly diverted a Selcuk Inan free-kick beyond Jasper Cillessen, but it flew just wide of the goalkeeper’s post.

After Robben had wasted a chance to double his tally, Umut Bulut should have levelled with Turkey’s best opening of the game.

The striker got above Bruno Martins Indi to meet a Kaldirim cross but he headed over the crossbar from six yards out.

Sneijder made Turkey pay for their wastefulness in front of goal two minutes after the break as he doubled Netherlands’ lead with a calm finish from inside the penalty area.

The Galatasaray midfielder received a pass from substitute Dirk Kuyt before firing low across Demirel into the bottom corner.

Demirel made crucial stops to deny Jeremain Lens and Sneijder before Cillessen was tested by a long-range strike from Turkish substitute Gokhan Tore.

Fatih Terim's side continued to push but wasteful finishing from substitute Cenk Tosun cost them dearly as they finished their campaign in fourth position.