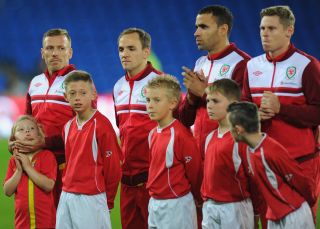 Bellamy announced earlier this week that he will retire from international football after Tuesday's final qualifier in Belgium, and duly marked his 77th cap by setting up Church for the striker to fire home the only goal of the game in the 67th minute.

Aaron Ramsey missed a late penalty for the home side, but it mattered little as Wales secured the win that boosted the side's chances of avoiding finishing bottom of Group A.

Wales manager Chris Coleman secured the three points with limited resources too, having been forced into making seven changes from the team that lost 3-0 to Serbia at the start of September, with 10 of his players dropping out of the squad in recent days.

The hosts, though, were boosted by the presence of Ramsey as the midfielder shrugged off a dead leg to captain the side.

The disjointed sides made for a fairly tight opening 10 minutes, but it was Stratev’s men who had the first clear chance on goal with Goran Pandev’s weak shot not really challenging Wayne Hennessey early on.

Wales were the next to try their luck in the 21st minute, with Tomislav Pacovski dealing well with a fine curling effort from Neil Taylor to prevent Macedonia going ahead.

The game continued to open up and both teams squandered valuable chances with Nikolce Noveski firing over from close range shortly before Church headed just clear of the crossbar for Wales.

The second half began in a similar fashion, although Macedonia had the lion’s share of the early chances with Predrag Randelovic's long-range shot flying over the bar before Ezgjan Alioski saw his fine cross cut out by Chris Gunter.

It was the home side who eventually managed to break the deadlock with just over 20 minutes remaining in the 66th minute thanks to a typical surging Bellamy run.

The Cardiff City striker tore down the wing and eventually produced a fine ball into the box that was smashed home with no hesitation by 24-year-old forward Church to give the hosts the advantage.

The visitors did their best to hit back, though, and just minutes later Ibraimi struck from range only to see a confident save from Hennessey deny him an equaliser.

Wales then had the perfect chance to double their advantage from the penalty spot after Ramsey was felled by Noveski, but the Arsenal midfielder saw his effort well saved by Pacovski.