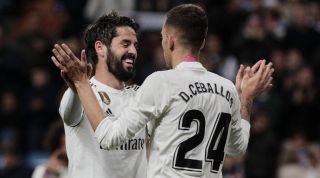 The Bernabeu outfit have already spent big during the close season on recruiting Eden Hazard, Luka Jovic and Ferland Mendy.

Seven players have already departed on permanent or loan deals, but Zinedine Zidane still has a 30-man squad at his disposal with another three – Casemiro, Fede Valverde and Eder Militao – yet to arrive for their pre-season tour starting in Canada.

With one month to go until the start of the La Liga season, Marca reports that Real Madrid president Florentino Perez plans to cut the squad down to at least 25 players.

They are looking to move Ukrainian goalkeeper Andriy Lunin out on loan to Real Betis, with no offers coming in for Keylor Navas as things stand.

Dani Ceballos, a reported target of Arsenal and Tottenham, is almost certain to leave, while Los Blancos are ready to listen to offers for Isco despite his determination to stay in Madrid.

James Rodriguez is also said to favour a stay, but Atletico Madrid have shown interest even though Real would prefer it if he joined Carlo Ancelotti at Napoli.

Nacho could be sent back on loan to the Bundesliga after a spell with Eintracht Frankfurt, while in attack there is a surplus of options.

Lucas Vazquez appeared set for a move to Arsenal but that has now been put on ice and Gareth Bale has no intention of leaving despite not being a part of Zidane’s plans.

Borja Mayoral appeared close to Real Sociedad but a deal is yet to be completed, while Mariano Diaz wants to stay and fight for his place despite being behind Jovic and Karim Benzema in the pecking order.

Brahim Diaz has received loan offers but wants to prove his worth at the Bernabeu, while Rodrygo could also be sent out on a temporary deal.