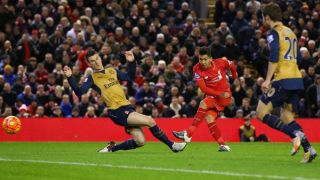 Jurgen Klopp has praised Roberto Firmino in the wake of his fine performance in Liverpool's 3-3 Premier League draw with Arsenal on Wednesday.

The Brazil international netted twice to take his tally for 2015-16 to three goals in 18 league outings and Klopp was pleased to see the forward show what he can really do.

"I could talk about this for half an hour, but to be honest I think it should be normal because I know how good he is," Klopp said at a news conference.

"If you are good, you have to show it and against Arsenal he did.

"It was very important for us because for 95 minutes, he was always thinking about playing in different positions and in all of them was really good.

"He scored perfect goals. The first was really good, the second spectacular, brilliant, whatever you want to say.

"It was a really good game."

Liverpool sit ninth in the table following Wednesday's draw with 31 points from 21 games.