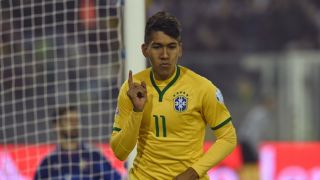 Liverpool's transfer fee to land Roberto Firmino is "brutal" and puts the Brazil forward under pressure to justify his price tag, according to the club's former defender Markus Babbel.

Earlier this week, Liverpool confirmed that Firmino would arrive from Bundesliga side Hoffenheim with reports suggesting the fee could rise to as much as £29million with add-ons.

Only Andy Carroll has cost Liverpool more and his time at Anfield proved to be unsuccessful, with the striker scoring just six goals in 44 Premier League appearances.

Babbel, who enjoyed a four-year spell on Merseyside between 2000 and 2004, believes Firmino will be expected to hit the ground running.

"That [transfer fee] is brutal," he told Bild. "When I heard that I flinched, because even for Liverpool that is not chicken feed.

"He is under a certain pressure with this weight on his shoulders. You have to win trophies. This is a major challenge for Roberto."

However, Babbel believes that Firmino will prove to be a good signing for Liverpool.

"Firmino and Liverpool, that fits," he added. "He is an atypical Brazilian, more German than many Germans. Roberto is disciplined, has enormous assertiveness.

"Roberto does not complain when he is fouled. He is not an actor, he stands up again. That is beneficial in England, because that is what English fans like to see."