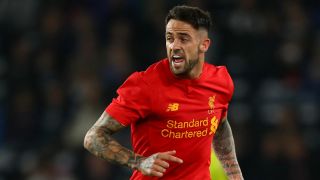 Danny Ings still believes he can make it at Liverpool after battling back to full fitness following two successive seasons wrecked by a pair of serious injuries.

Ings has been playing reserve-team football and came off the bench in the EFL Cup loss at Leicester City, but he is yet to feature in the Premier League this season and has only started three league games since joining Liverpool in 2015.

With Roberto Firmino and Daniel Sturridge both out of form, Jurgen Klopp has a selection headache up front and Ings says he can be the solution to Liverpool's attacking issues.

"Everywhere I have been, I have always found a way to make it happen," former Burnley striker Ings told The Times. "I have been in a lot of tough situations at previous clubs where it has been hard to break in.

"People from the outside looking in will probably have the assumption, 'Oh, he's the forgotten man', but it has not crossed my mind at all. I still believe in myself. I still believe I can play in this team.

"When you are at a club like Liverpool, it is not a club that you want to walk away from. It would grate on me for the rest of my career, and the rest of my life, if I had not done everything to give it my all.

"I still feel like I have a big part to play in this football club."

Ings collected his only England cap in a 3-0 European Championships qualifying win away to Lithuania in October 2015, with Gareth Southgate's side set to visit Vilnius again on Sunday.

And the 25-year-old says he can force his way back into Three Lions contention ahead of the 2018 World Cup, once he is playing regularly at club level.

"I don't have the cap on show, no, not yet," Ings added. "Because I don’t want to be that guy who just has one cap.

"At the time I was hoping it would be one of many and now I have got that hunger back, I want that to be the case. I want to look back at the end of my career having numerous caps under my belt. That is one of my aims.

"Sunday's game will make me think back - I'll have mixed emotions. It was such a fantastic occasion for me in my career and something that I had always wanted to do since I was a kid.

"I honestly felt at the time that this was the start. The start of breaking into more squads and, hopefully, cementing my place at Liverpool. Seeing that fixture again hurts a little bit."