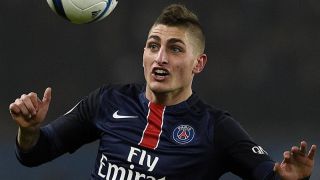 Marco Verratti says he has no intention of leaving Paris Saint-Germain until he helps the club win the Champions League, despite rumours Real Madrid are interested in his services.

It is thought the European champions are weighing up a bid for the Italy international, who missed Euro 2016 with a groin injury.

But the diminutive midfielder has unfinished business in the French capital as new boss Unai Emery seeks to translate the club's dominance of Ligue 1 into Champions League success.

Asked if he would be at PSG this season, Verratti told Le Parisien: "Yes. The club and I discussed many times. We both have the same goal of winning here.

"It's been four years that I have been in Paris. I begin my fifth year. Until we have won the Champions League, I want to stay here. That's the goal I set myself.

"I want to win with this team, because it's like a family.

"It's nice when a big team like Real Madrid is interested in you, but I decided to win with Paris."

Madrid's reported interest in the 23-year-old comes amid speculation the Santiago Bernabeu outfit have missed out on bringing in Paul Pogba from Juventus.

The France international is said to be on the brink of a move to Manchester United.