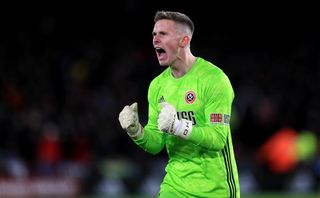 Remaining in the Premier League is the objective for both clubs, after coming up from the Championship last season, and after a couple of second-half goals by John Fleck, the Blades are well on their way to achieving that aim.

A dire first half was followed by a very watchable second period in which the Scot’s double saw Chris Wilder’s team move up to fifth in the table.

These two leading us all the way ❤️ pic.twitter.com/xjXtk6TAun— Sheffield United (@SheffieldUnited) December 14, 2019

For Villa, whose captain Jack Grealish crashed a penalty against the crossbar when attempting to half his side’s deficit, survival is proving to be more of a battle.

The two teams contested a couple of barnstorming matches last season, with the Blades winning the corresponding fixture 4-1 before a 3-3 draw at Villa Park. However, Saturday’s game paled in comparison.

A low-key start saw both teams cancel each other out. The early battle for midfield supremacy was an interesting one, though, and home duo Oliver Norwood and Fleck were both on yellow cards with only 16 minutes on the clock.

Fleck’s booking was significant as it was his fifth of the season and he will now miss the trip to Brighton next weekend through suspension.

The game’s first attempt at goal did not arrive until the 27th minute, but Blades defender John Egan was unable to keep his volley down and the ball flew harmlessly over the crossbar.

It turned out to be the only effort of any note during a tetchy first half in which Villa had succeeded in stifling the hosts, although there were signs towards half time that the Blades were beginning to find some rhythm and momentum.

That sense continued into the second half and a superb curling cross by Norwood into the six-yard box from the right flank was bungled wide by David McGoldrick, who should really have done better.

Wilder’s team took advantage of their best spell of the match by taking the lead, and the goal came from a piece of football that defied anything that the previous 50 minutes had produced.

Norwood found Chris Basham with a back-heel and his pass sent John Lundstram racing through down the right side of the penalty area, where he pulled the ball back for Fleck to steer home his near-post shot.

Villa now had to be more adventurous and they responded well to falling behind. Wesley thundered a shot into the side-netting before Grealish sent a header agonisingly wide as the hour mark approached.

Grealish was beginning to dictate play more and the Villa captain flashed a dangerous cross into the six-yard box that ricocheted around before the ball was cleared.

Despite Villa’s pressure, it was the hosts who scored the next goal. A move started and finished by Fleck, the diminutive Scot got on the end of McGoldrick’s clever flick behind the defence and drilled the ball confidently past Tom Heaton.

VAR presented Villa with a chance to get back into the match when a clear handball by Egan was referred to Stockley Park. However, Grealish belted the resulting penalty against the crossbar.

Wilder’s team could have added to their tally, but a first Premier League goal continues to elude McGoldrick as he turned an Enda Stevens cross wide late on from close range.