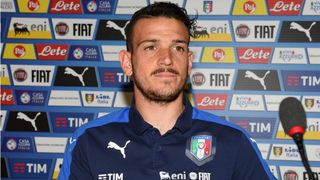 Alessandro Florenzi believes all teams at Euro 2016 fear facing Italy due to their impressive performances in France.

Antonio Conte's men surprised with a 2-0 win over Belgium in the group stages, before shocking Spain by the same scoreline in the round of 16.

They now face world champions Germany in the quarter-finals and versatile wing-back Florenzi hopes they can replicate their performance from the Spain match.

"I think everyone is a little scared of Italy right now," Florenzi told the official UEFA website.

"We have proven to be a good team, one that never gives up.

"We are happy that other teams fear us, because that means we have been playing well.

"I hope we continue to do so and approach our next game just like we did in the round of 16 game against Spain."

Italy have never lost to Germany at a major tournament, beating them 2-1 when they last locked horns in the semi-finals at Euro 2012.