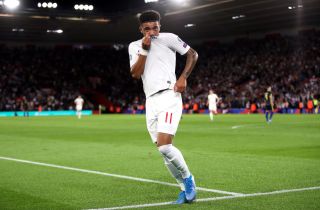 Jadon Sancho had an evening to remember at Southampton as he scored twice and made another in England’s 5-3 win over Kosovo.

The Borussia Dortmund star is quickly turning himself into a key threat in Gareth Southgate’s attacking armoury.

Here, the PA news agency takes a closer look at his performance.

Having already been the first player born in the 21st century to play for England, he followed that up by becoming the first to score. Not only that but, aged just 19 years and 159 days, he is now the youngest player to score two or more goals for the Three Lions since Wayne Rooney in 2004. Feeling old yet?

The teenager has had an electric start to the campaign domestically, having scored two goals and made three more in the first three games for Dortmund in the Bundesliga. When he broke his international duck in the 44th minute he became the third player to score for England while playing in the German league, following in the footsteps of Kevin Keegan and Tony Woodcock. That goal was an accomplished finish as he confidently tucked away Sterling’s incisive pass. He cannot take too much credit for the second goal, other than to say he was in the right place at the right time to tap home another Sterling assist from a few yards out.

It is fair to assume that Harry Kane and Raheem Sterling are locked in to play in Gareth Southgate’s front three, but this performance by Sancho proved he might be the third choice ahead of Marcus Rashford, the man he replaced in the team. His ability to run with the ball was evidenced by his 100 per cent dribble success rate and it was his trickery down the right that earned him an assist as he beat his defender and sent in a low cross that was turned in by a Kosovo defender. That was one of two key passes he made before eventually being replaced in the final 10 minutes.

Sancho perhaps showed he is still wet behind the ears in the second half when England were awarded a penalty. The 19-year-old walked over to Harry Kane and lingered, possibly in the desperate hope that the skipper would hand him the ball and allow him the chance of an international hat-trick. Kane was having none of it and eventually took the spot-kick himself, though saw it saved by Arijanet Muric and Sancho was denied the opportunity to claim the matchball.