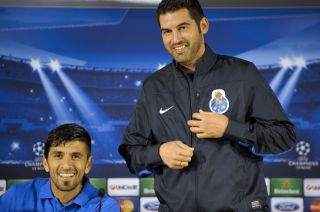 The Portuguese champions host Zenit at the Estadio do Dragao and the Russians are yet to win in this season's UEFA Champions League group stage.

However, Fonseca, who saw his side beaten 2-1 by Atletico Madrid last time out, feels the tie is just as important for Luciano Spalletti's Russian Premier League leaders.

"Every team has the possibility of going through in our group. Our ambition is always the same, no matter the opponent we are facing, we always want to win."

Porto will come up against former player Hulk on Tuesday, with the Brazilian scoring 54 goals in 99 league appearances while at the club.

Hulk has seven league goals this season as well as two in the Champions League, although Fonseca claims his side do not need a special plan to cope with him.

"He was one of the best at Porto, but now that means nothing," R-Sport quoted him as saying.

"We’ll play against him exactly the same as we do against other opponents.

"The team's getting better and better every day, but it's really the result, not the quality of the football, that will come first."