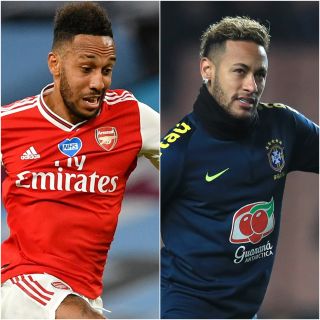 Arsenal’s star striker Pierre-Emerick Aubameyang is reportedly on the verge of signing a new deal. According to the Daily Mail, the club are currently in the process of drawing up the final paperwork on a three-year contract extension worth more than £250,000-per-week.

The Mail also reports Barcelona are set to resume attempts to lure Neymar back from Paris St Germain. The paper says the move has been spurred on by the Catalan giants’ disastrous Champions League exit, with the club reportedly prepared to offer £55million for the Brazilian’s services.

Liverpool are believed to be interested in Bayern Munich midfielder Thiago Alcantara. The Guardian reports the 29-year-old is keen on a move to Anfield, however, the two clubs have reached an impasse on his asking price, with Liverpool unwilling to meet Bayern’s £27.2m price tag.

Bayer Leverkusen have reportedly issued an ultimatum to Chelsea that could derail their pursuit of midfielder Kai Havertz. According to the Evening Standard, the Blues have been told to stump up no less than £90m or risk missing out on the 21-year-old. Considering Chelsea have already spent more than £80million on recent acquisitions Hakim Ziyech and Timo Werner, Leverkusen’s asking price for Havertz could be more than the club is able to afford.

The Daily Mail says Everton have approached relegated Watford regarding the availability of midfielder Abdoulaye Doucoure. A proposed £30m deal for the 27-year-old fell through last year and Doucore is believed to be open to leaving Vicarage Road in the summer.

Could both Dutchman be heading to Barcelona? https://t.co/n8CxytNCoL— Mirror Football (@MirrorFootball) August 17, 2020

Kalidou Koulibaly: Manchester City have stepped up their interest in the Napoli defender, according to La Repubblica.

Junior Caicara: West Brom and West Ham have been told that a £2.7m fee is required to sign the Istanbul Basaksehir full-back, reports Sport Witness.