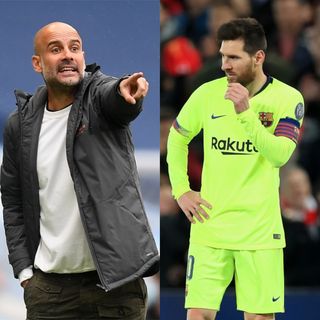 The chances of Lionel Messi joining Manchester City have grown with news his father is in England to discuss the deal, according to the Sun. Messi’s admission that he wants to leave Barcelona has put Europe’s major clubs on alert and City – coached by Messi’s former manager Barca Pep Guardiola – are said to be front-runners. The Sun says Jorge Messi is in England to discuss his 33-year-old son joining City, although doubt remains over whether the striker can leave Barcelona for free. Paris St Germain and Manchester United have reportedly dropped out of the chase, leaving City short-priced favourites to sign him.

In other Messi developments, the Telegraph reports City could have to part with as much as £500million in a deal which would have him playing for them for three years before moving to their sister club New York City FC. Messi is said to have asked to leave for free under a clause in his contract, but Barcelona insist the clause has expired. Barca would hold out for a £200m transfer fee, it has been reported, with rest of City’s outgoings said to be taken up by Messi’s income of around £100m a year in wages and bonuses. Messi will still attend Barcelona training on Monday to avoid any legal problems with the club, Spanish website Sport reports.

While Manchester United could afford Messi, they are instead sticking with Jadon Sancho – 13 years the Argentinian’s junior – as their main transfer target, Sky Sports reports. United have been linked with the England winger for months. Borussia Dortmund’s insistence on a £108m transfer fee remains a sticking point, but speculation says that with United now the only club in the hunt, Dortmund might wait until late in the transfer window to get the deal done.

Tottenham are moving to sign Wolves full-back Matt Doherty in a £15million transfer, the Daily Mail reports. Spurs are said to be open to selling Serge Aurier, after interest in the French right-back from Bayer Leverkusen and AC Milan, with 28-year-old Republic of Ireland international Doherty seen as a replacement.

Liverpool are in the running to sign Bayern Munich midfielder Thiago Alcantara, the Daily Express reports. The 29-year-old is looking for a change of location following Bayern’s treble-winning season, with Liverpool linked to the Spanish midfielder in a £30m deal.

Chelsea ‘complete Thiago Silva transfer’ as ex-PSG star ‘signs contract’ amid plans for him to be made club captain https://t.co/1E8MEgbfgE— The Sun Football ⚽ (@TheSunFootball) August 26, 2020

Ben White: The 22-year-old Brighton defender, who played on loan at Leeds last season, is set to stay with the Seagulls despite interest from Liverpool, Chelsea and Manchester United, the Sun reports.

Benoit Badiashile: A £22m bid from Manchester United for the 19-year-old Monaco defender has been rejected, France’s RMC reports.

Edinson Cavani: The 33-year-old striker, who left PSG at the end of last season, is still up for grabs after he rejected a move to Juventus, Sky Sports Italy says.