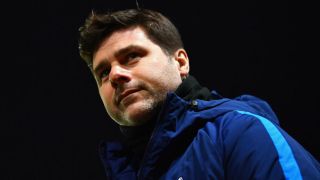 Mauricio Pochettino has defended himself against Arsene Wenger in a diving row ahead of the derby between Tottenham and Arsenal, insisting he does not encourage cheating.

The Spurs boss had claimed after his side's draw with Liverpool that football is about attempting to "trick your opponent", with numerous Spurs players drawing criticism for perceived simulation at Anfield.

Former Tottenham star Gary Lineker hit out at Pochettino's defence of "cheating" on Twitter, while Wenger's response, ahead of Arsenal's trip to Wembley this weekend, was to suggest English players have now mastered the art.

Pochettino is adamant it is not an issue of nationality, while again attempting to explain his beliefs on the matter.

"I am honest always," he told a pre-match news conference. "In 2002, my vision about English football [was that] I didn't touch Michael Owen [in the England-Argentina World Cup clash] and he dived.

"Today we are so sensitive. I like to treat the sense of football. Football for me is being creative, to try to not cheat but trick the opponent in a good way.

"Let's not be focused on one country. I love the diversity. You can find it in England or Spain, a different type of player."

And Pochettino is looking forward to the challenge of taking on Arsenal, although he would not be drawn on how the January transfer window has affected Wenger's men - the Gunners having lost Alexis Sanchez and Olivier Giroud, among others, while signing Henrikh Mkhitaryan and Pierre-Emerick Aubameyang.

"Arsenal will be tough to play, they have good quality, talented players and are one of the best teams in the league," Pochettino said.

"I cannot say if they look stronger or not than they were since their new signings. We are focused on us. I don't care. They play with 11, we play with 11.

"The derby is special for everyone and Wembley is starting to feel good."

Meanwhile, the Tottenham boss is yet to decide if Toby Alderweireld will feature against Arsenal, having made his return in the home FA Cup win over Newport County after a three-month lay-off.

Alderweireld had earlier described his delight to the club's official website: "I worked hard in the last couple of months to get to this point.

"The last weeks have been tough and I'm very happy to get 90 minutes from the manager, to show myself again and to be able to help the team again. I'm a very happy man."