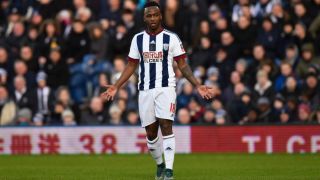 Ben Foster has warned unsettled West Brom striker Saido Berahino to put his sole focus into playing for the club for the remainder of the season.

The 22-year-old took to Twitter to threaten to go on strike after a transfer in August failed to materialise, and he has struggled for form and regular football under Tony Pulis after further problems behind the scenes at The Hawthorns.

Berahino was the subject of interest from Newcastle United and Stoke City during the latest transfer window but West Brom rejected all approaches, meaning he will remain at the club until at least the end of the season.

And Foster has told the England Under-21 international to forget the distractions of social media and concentrate on finding his form once again.

"When the gaffer says that little incidents have gone on, they're just little silly things that he doesn't need to do," Foster said.

"These days with the likes of Twitter and Instagram, that kind of stuff, people are getting in touch with him from all different corners of the world. The best thing to do would be to delete all that rubbish and just focus on playing football.

"He knows he's here until the end of the season, it's as simple as that. You'd like to think he'll get his head down and get stuck in.

"He just doesn't need it. You saw when he came on that he offers a threat, he'll always score goals no matter where he goes because he is a natural goalscorer."