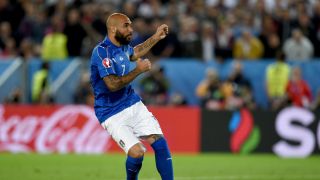 Simone Zaza has been omitted from the Italy squad for October's World Cup qualifiers against Macedonia and Albania despite reports his strong start to the season could earn an international recall.

Zaza has hit five goals in six LaLiga games for Valencia this season, including a hat-trick against Malaga, but the West Ham United flop has not played for his country since November 2016.

The forward is remembered for his unusual stuttering run-up that preceded a crucial penalty miss in Italy's Euro 2016 quarter-final defeat to Germany.

Ventura also left out Fiorentina's talented young winger Federico Chiesa and Inter midfielder Roberto Gagliardini, but Bologna's Simone Verdi will have the chance to add to his maiden international cap won in March.

Italy's chances of securing automatic qualification for Russia 2018 appear remote after a 3-0 loss to Spain in Madrid earlier this month, a result that left the Azzurri trailing three points behind the Group G leaders with two games remaining.

However, victories at home to Macedonia on October 6 and in Albania three days later could secure Italy a more favourable draw in the play-offs.