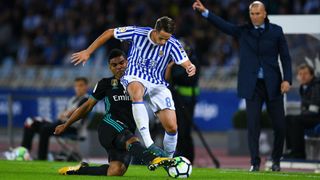 Januzaj was considered one of the most promising youngsters in European football after breaking into the first team under David Moyes at Old Trafford in the 2013-14 season.

However, after failing to impress Moyes' successor Louis van Gaal, Januzaj had uninspiring loan spells at Borussia Dortmund and Sunderland before opting for a fresh start with Sociedad, who he joined on a five-year deal in July.

A knee injury has hindered Januzaj's early days in Spain, but the 22-year-old is desperate to prove his doubters wrong after his Old Trafford disappointment.

"These are the people that don't know anything about football," he told the Independent. "I don't care, I keep working hard. You can only go in one direction and that is to shut those people up.

"Once you do it, they will look ridiculous. It will feel amazing. I will feel very good because those people were chatting sh*t about me.

"If anything, I'm even happier because it gives me more power. It gives me the feeling: I want to show these people that if they want to talk badly of me, I'll show them.

"It's a challenge for me, I don't mind. They can say whatever, I know that it is not true."