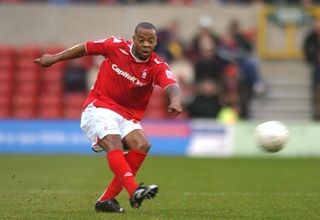 Former Bristol Rovers, Nottingham Forest and Ghana striker Junior Agogo has died at the age of 40.

He helped the Black Stars to a third-placed finish at the 2008 Africa Cup of Nations and scored 12 goals for Ghana.

Agogo suffered a stroke in 2015, just three years after playing his final game in professional football for Scottish club Hibernian.

Agogo returned to England to play for QPR and Barnet but it was at Bristol Rovers where he enjoyed his best goals return, 41 in 126 league games between 2003 and 2006.

He then spent two seasons at Forest, scoring 23 goals in 75 appearances, before ending his career with Egyptian club Zamalek, Apollon Limassol in Cyprus and Hibernian.

The striker’s former clubs paid tribute to Agogo on social media, with Rovers describing him as “a Gas legend”.

Forest tweeted: “Rest in peace, Junior. #NFFC are saddened to learn that former striker Junior Agogo has passed away.”

On their official Twitter account, the Ghana Football Association said: “On behalf of the Ghanaian football fraternity, we extend our sincere condolences to the family of our Black Star, Junior Agogo. May his soul Rest In Peace.”

Agogo had been a keen supporter of The National Brain Appeal’s fundraising campaign for high dose therapy programme for stroke and brain injured patients with aphasia throughout his illness.

Aphasia is an impairment of language resulting from injury to the brain, most commonly from a stroke.

Theresa Dauncey, chief executive of The National Brain Appeal charity, said: “We are very sad to hear that former professional footballer Junior Agogo has passed away.

“Junior very kindly lent his support to The National Brain Appeal’s Aphasia Appeal, a condition he had experience of following his stroke. Our thoughts are with his family and friends.”