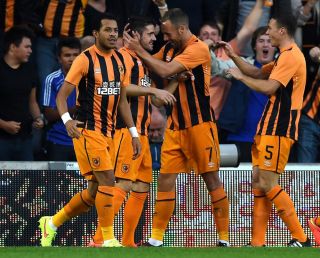 Hull's maiden voyage into continental competition was ended on Thursday as last's season's FA Cup runners-up were knocked out of the UEFA Europa League by Lokeren on away goals, despite a 2-1 triumph at the KC Stadium.

Full-back Rosenior could not hide his disappointment at Hull's exit, but is keen to focus on the trip to Villa Park and believes a return to Europe is achievable.

"It's devastating [to be knocked out]," he told the club's official website. "We have to focus our attention on the Premier League now, and first and foremost Aston Villa on Sunday.

"With the way that this club is growing and growing, I think there will be plenty more seasons where we can have European football."

Steve Bruce's men may have fallen short in Europe, but the start to their league campaign has been solid, with a 1-0 win at QPR followed by a 1-1 draw against Stoke City.

Hull played over 75 minutes with 10 men against Stoke after James Chester was sent off, and with the centre-back set to miss out through suspension Michael Dawson could make an immediate debut having joined from Tottenham last Tuesday.

Robert Snodgrass will be absent for the visitors after suffering a dislocated kneecap on the opening day, while Villa have fitness concerns of their own with defensive duo Aly Cissokho (ankle) and Ron Vlaar (knee) set for late tests, and Jores Okore (knee) ruled out.

That poor form in their own back yard has shown signs of continuing this term, with a 0-0 draw against Newcastle United last weekend preceding Wednesday's 1-0 League Cup loss to third-tier Leyton Orient.

However, Villa can take solace from the fact that Hull's three Premier League visits to Villa Park have all ended in defeat.

A lack of goals hampered their progress last season, with just 22 scored at Villa Park, and the absence of key strikers Christian Benteke (Achilles) and Libor Kozak (leg) did little to aid their cause.

However, manager Paul Lambert revealed that the duo are stepping up their recoveries, stating: "Christian is ahead of Libor at the minute in his rehab.

"He will be, with a bit of luck, doing little bits with us after the [international] break.

"He's doing really well. Libor is a bit behind him but doing very well himself."