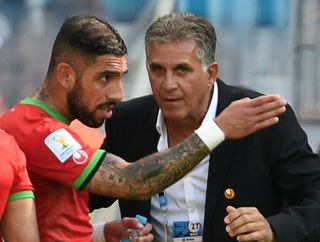 Carlos Queiroz's side will need to put the disappointment of their late defeat to Argentina behind them and break from their shackles if they are to finish second in Group F, while hoping rivals Nigeria lose.

But first the focus must fall on ending their goalscoring drought, with Iran one of only two sides at the World Cup - Greece being the other - who have yet to score.

The display against Argentina will have given them a huge confidence boost, though, as Iran came within a few minutes of producing one of the most surprising results in World Cup history, until Lionel Messi's moment of brilliance.

Iran created chances of their own but Reza Ghoochannejhad and Ashkan Dejagah spurned the best of them, leaving Queiroz's men to contemplate what might have been.

Bosnia's debut at the global showpiece has not gone according to plan as their impressive form in qualifying, where they scored 30 goals, has failed to materialise in Brazil.

Defeats to Argentina and Nigeria have ended their hopes of qualification for the second round but Wednesday's match offers an opportunity to restore some pride and record a first World Cup win.

Talismanic striker Edin Dzeko has endured a frustrating tournament, missing a host of chances and being denied by an erroneous offside flag against Nigeria.

The Manchester City forward is not expected to start the final match as coach Safet Susic looks to give others a chance.

That will be music to the ears of Queiroz, who has been preparing his players for a crucial day in their World Cup history in Salvador.

"My major concern is to keep players focused," he said. "And, they'll need to convert those chances."

If Iran can finally find the back of the net to win, and Nigeria lose, they would both finish with four points and there could be a lengthy process to sort out second place in the group.

Initially goal difference would decide it, but there is a small chance that a lottery would have to decide who finishes second.

If Iran win their match 1-0 and Nigeria lose to Argentina by the same score, they would end up level on points and with the same number of goals for and against.

Given the teams drew 0-0 in their game, the only way to decide who progresses would be to draw lots - something that has never been used at a World Cup.

Iran should not take it for granted that they will win their final game, though, as Susic is determined to end Bosnia's maiden appearance at a finals on a high.

"Our obligation is to go out with honour, to leave a good impression,'' the coach said. ''It is a pity for this generation that it exits the World Cup so soon.

"They ran, fought and created chances."