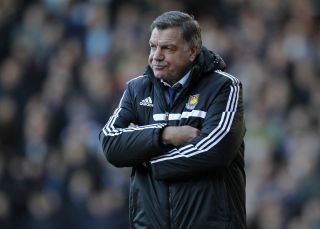 A horrific week for the Upton Park outfit started with a 5-0 FA Cup drubbing at the hands of Championship outfit Nottingham Forest on Sunday.

Allardyce chose a young side at Forest amidst an injury crisis, but the return of several experienced players made no difference at Manchester City on Wednesday as they were hammered 6-0 in the first leg of their League Cup semi-final.

With West Ham sitting 19th in the Premier League table, three points adrift of safety, the pressure is building on Allardyce, who says his players will come out fighting in Wales.

"We are professionals and we've got to take the criticism thrown at us because that's what happens in the game at this level.

"We've got to get out there, face the music and use it to anger us, if you like, make us mad, prove them wrong and win football matches."

West Ham have won just once in 13 top-flight matches and will be without suspended captain Kevin Nolan.

Mark Noble returned from a calf problem against Manchester City, while striker Andy Carroll (foot) and defender Winston Reid (ankle) are on the comeback trail.

The game is also crucial for Cardiff, who are 17th – just one point above the relegation zone.

New manager Ole Gunnar Solskjaer led his side to an impressive 2-1 FA Cup win at Newcastle United on Saturday and has bolstered his squad this week with the signing of Norway playmaker Magnus Wolff Eikrem.

Eikrem previously played for Solskjaer in Manchester United's reserve team, as well as at Molde, and could come straight into the side to make his Premier League debut.

Further signings are expected in January as Cardiff, who have won just four league matches this season, aim for survival.

Midfielder Jordon Mutch, Cardiff's joint-top scorer in the league this term with four, could return from a hamstring injury, while Craig Bellamy and Kevin Theophile-Catherine are struggling with knee issues for the hosts.