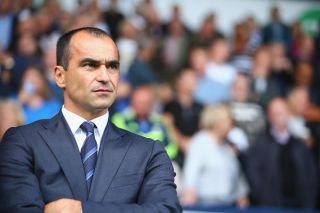 Paul Lambert's men have made a solid start to the campaign that has included two impressive victories at the Britannia Stadium and Anfield.

Those wins over Stoke City and Liverpool elevated Villa into second place after four games, although a run of three consecutive defeats has hampered progress, as has the fact that Lambert's side have failed to score since Gabriel Agbonlahor netted on Merseyside in mid-September.

However, Martinez feels Villa's pace on the break is something his players will need to be aware of at Goodison Park this weekend as Everton look to kick-start their stuttering campaign.

One win from seven Premier League games has left Everton languishing in 17th and Martinez acknowledged Villa are the last team he wants to face on current form.

"I think we all know Aston Villa are probably the last team you want to play at home. They are a really, really strong team away from home," he said on Thursday.

"We all know how difficult it is to go the Britannia Stadium. Then they went to Anfield and got a really impressive result there.

"We know they're really hard-working, very dynamic and carry a real threat with the likes of Christian Benteke, Charles N’Zogbia, Andreas Weimann and Gabriel Agbonlahor."

Everton did the double over Villa last term and will be eager for another positive result after a relatively poor start to the campaign.

While Martinez's men have been impressive on their return to European competition, a surprisingly suspect defence has caused them problems in the league, with Everton having conceded the most goals (16) in the top flight.

Villa have only managed four goals in the league this term, but last season's top scorer Benteke could make his first start since March.

Benteke came off the bench to feature in the 2-0 defeat against Manchester City prior to the international break, following a lengthy spell on the sidelines with an Achilles injury.

Lambert has also been boosted by the return to full fitness of Ron Vlaar following a calf problem, although the Scot could be without Fabian Delph (shoulder) and Philippe Senderos (thigh).

"It was just an awkward fall," Lambert said of Delph's injury.

"Fabian and Philippe are the doubts but, on the plus side, Ron is back and Benteke is pushing to start. He's trained really well and [has been] looking like his old self in the last week or so."

Martinez is waiting on the fitness of Ross Barkley following his recovery from a ligament injury, while Steven Pienaar (thigh), Seamus Coleman (hamstring) and James McCarthy (thigh) are all very doubtful.