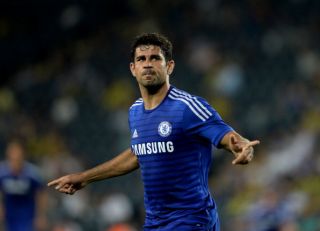 Chelsea have kicked off their campaign with wins against newly promoted duo Burnley and Leicester City, with Costa - who arrived from Atletico Madrid for a reported £32million fee in July - finding the net in both games.

However, the London club confirmed on Thursday that the Spain international striker is suffering from a "minor muscular injury" and faces a race against time to be fit for the trip to Merseyside.

And Costa could prove a big miss as Chelsea try to improve on a poor record against Everton on the road.

The hosts have won four of the last five league meetings between the sides at Goodison Park, including a 1-0 victory courtesy of a Steven Naismith goal last season. And, in contrast to their visitors, Everton received a boost to their attacking ranks this week.

Having already secured the services of Romelu Lukaku on a permanent basis for a fee of £28million during the close-season, Roberto Martinez snapped up another Chelsea old boy in the form of Samuel Eto'o on Tuesday.

And the Everton manager has hinted that the Cameroonian, who retired from international duty on Wednesday, could be thrown straight into his starting XI.

"It is difficult," he told the club's official website. "I tried to have that conversation and, realistically, I would have liked him to have 10 or 11 sessions before we put him in a competitive environment.

"He is working [on Thursday] and everything will go down to what condition he has over the next two or three days to make that decision.

"He arrives at a good time with the international break and that will speed up his adaptation period."

Lukaku limped out of Everton's 2-2 draw with Arsenal last weekend, but is in contention to face his former club, while Christian Atsu - on loan from Chelsea - is ineligible.

Andre Schurrle was thought to have picked up a knock in Chelsea's win over Leicester last weekend, but the club have not revealed whether he will be fit to face Everton.