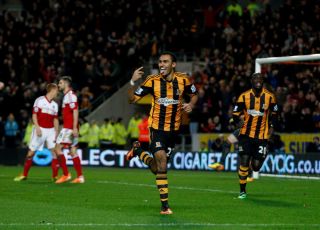 Many had written off Fulham's chances of survival by the time Felix Magath replaced Rene Meulensteen as manager, but the German has led a revival at the west London club - with his side now sitting just two points adrift of safety.

Norwich City do not play not until later on Saturday, and with Cardiff City visiting Sunderland on Sunday, three points would lift Fulham out of the relegation zone for the first time since January.

Fulham were rooted to the bottom of the English top flight when Magath took over in February - a 6-0 humiliation at the KC Stadium one of the low points of Meulensteen's short reign.

However, midfielder Scott Parker remains hopeful Fulham can defy the odds and beat the drop.

"I’d probably be lying if I said the mood around the place was fantastic because obviously when you’re down near the bottom of the league it’s very tense, very nervy.

"I’m hoping we can all just stick together and give it one final push, and hopefully have a bit of luck, and see what happens.”

Hull followed up their 5-3 FA Cup semi-final victory over Sheffield United with a 3-0 home defeat to Arsenal - their opponents in the final next month - last time out in the league and will be keen to demonstrate that they have not taken their eye off the ball.

The loss to Arsenal was Steve Bruce's men's sixth in nine league matches and left them six points clear of the relegation zone with a game in hand.

Victory for Hull on Saturday would represent a huge step towards making sure they will play Premier League football for at least another season and Bruce wants to see his charges finish the job as soon as possible.

"We are still in a wonderful position, we've just got to see it through," Bruce is quoted as saying by the Hull Daily Mail. "We've got three away games before our last home game. Against teams in and around us we've been particularly good, and that's why we're in the position we're in.

"It would be nice to get a win to put it to bed but we've still got a bit of work to do."

Kieran Richardson (muscle), Mahamadou Diarra (knee) and Sascha Riether (illness) could all return for Fulham, while Sone Aluko (hamstring) and Shane Long (calf) are the biggest concerns for Hull.