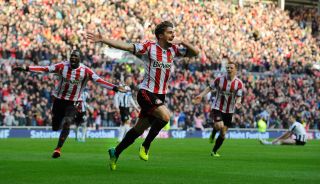 After claiming a first Premier League victory of the season last Sunday at the expense of their fierce rivals, Sunderland face a trip to Bruce's Hull City.

On-loan Liverpool forward Fabio Borini came off the bench to score the goal that defeated Newcastle 2-1 at the Stadium of Light, enhancing his claims for a starting berth.

Sunderland manager Gus Poyet told the club's official website: "I know a few managers prefer to have 11 in there and not too many pushing for a place.

"But I like to have those problems; it's then up to me to make decisions."

Despite triumphing against Newcastle, Sunderland are 19th in the Premier League and four points from safety.

Hull, who many observers expected to struggle on their return to the top flight, are much more comfortably placed in 10th, despite losing their last two league matches.

Bruce's men are also unbeaten at home, having picked up eight points from four matches at the KC Stadium thus far.

However, if Bruce - who managed Sunderland between June 2009 and November 2011 - is to oversee a fourth league win of the campaign - his side must overcome an awful recent record against the Wearside club.

Sunderland have won each of the previous six meetings between the teams, conceding only two goals in the process - both in 4-1 victories.

Hull are hampered by a lengthy injury list, added to when Alex Bruce (groin) and Aaron Mclean (calf) picked up problems during Wednesday's League Cup tie with Tottenham, which was eventually won on penalties by Andre Villas-Boas' men.

Aluko is battling a calf problem, while Brady has yet to regain full fitness after hernia surgery.

Sunderland's Jozy Altidore, whose only goal so far this season came against MK Dons in the League Cup, scored just once in 28 Premier League appearances for Hull in the 2009-10 season.