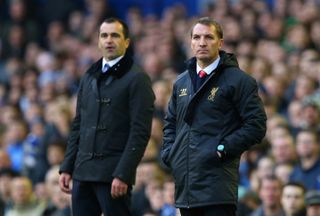 Just a point separates fourth-placed Liverpool and their city rivals, who dropped down to sixth spot after they could only draw at West Brom in their last Premier League match.

There is little between the neighbours from across Stanley Park in the battle to secure UEFA Champions League football and they have been evenly matched in recent encounters.

Each of the last three derbies have finished as a draw, the latest of which saw Daniel Sturridge deny Everton at Goodison Park in November with a late goal to snatch a 3-3 draw.

Both Liverpool manager Brendan Rodgers and Everton boss Roberto Martinez will be eager to secure their first Merseyside derby victory.

Rodgers' side have made a promising start to 2014, winning four of their five matches so far this year and reaching the fifth round of the FA Cup in the process with a 2-0 win at Bournemouth on Saturday.

England striker Sturridge was on target against the Championship side and the former Chelsea man has now scored in each of his last four games.

Liverpool have made Anfield a fortress this season, losing only once at home when Southampton came away with a 1-0 victory back in September.

Rodgers is expected to recall in-form winger Raheem Sterling after the teenager started on the bench at Bournemouth, while Jon Flanagan is vying with Martin Kelly to start at right-back in the absence of Glen Johnson, who was ruled out "indefinitely" by Rodgers in the week due to several injuries.

First-choice goalkeeper Simon Mignolet will return to the starting line-up after being rested on Saturday, but Lucas Leiva (knee), Jose Enrique (knee) and Daniel Agger (calf) all remain sidelined.

Joe Allen could be back after sitting out the trip to the south coast and it remains to be seen if Mamadou Sakho (hamstring) will be fit.

Everton also reached the fifth round of the FA Cup at the weekend, but their 4-0 win at Stevenage came at a cost as Bryan Oviedo suffered a double fracture of his left leg.

The Costa Rica international is set to miss the FIFA World Cup after sustaining the horrific injury against the League One strugglers, and looks unlikely to play again for his club this season.

Everton have not won in the last seven derbies - a run stretching back to since October 2010 - but the trip to Anfield holds no fears for Martinez.

He said: "I think we are capable of going anywhere and beating any team. What we will need on Tuesday night is a combination of those two games. We need to be absolutely perfect.

"We're not going to go to Anfield feeling inferior. We are not going there looking for a damage-limitation performance."

Martinez, whose side are unbeaten in their last six games, could include new signing Lacina Traore in his squad for the first time.

The Spaniard will check on the fitness of Seamus Coleman, who missed the trip to Stevenage with a minor soft tissue injury, and Steven Pienaar (groin).

Antolin Alcaraz (muscle fatigue) and Gerard Deulofeu (hamstring) could come back into contention, but Ross Barkley (broken toe), Darron Gibson and Arouna Kone (both knee) are definitely out.