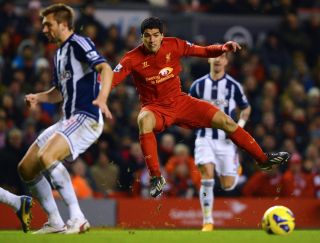 Steve Clarke's men have won their last two top-flight fixtures at Liverpool without conceding, as they followed up a 1-0 success in April 2012 with a 2-0 win last season.

That most recent victory - which came courtesy of late goals from Gareth McAuley and Romelu Lukaku - gave West Brom a 2012-13 Premier League double over the Merseysiders, after they beat Brendan Rodgers' side 3-0 at The Hawthorns on the opening day of the campaign.

Following an inauspicious start to this season, Clarke's team are now on a five-game unbeaten run in the Premier League - a streak that includes a 2-1 win at champions Manchester United last month and represents their longest stretch without defeat since April 2011.

However, they will face a Liverpool side in good form themselves, with Rodgers' men sitting joint second in the table after suffering just one defeat in their eight league fixtures this term.

That reverse came at the hands of Southampton at Anfield in September, but the defeat to the St Mary's outfit is their sole loss in their last 16 Premier League fixtures.

Liverpool, who drew 2-2 at Newcastle United last time out, will once again look to their potent front pairing of Daniel Sturridge and Luis Suarez for inspiration this weekend.

Sturridge is the Premier League's top scorer with seven goals, while Suarez has found the net three times in three games since his return from suspension.

Brazilian playmaker Philippe Coutinho (shoulder) will again be sidelined for the hosts on Saturday, though, while Jose Enrique (knee) could also be absent.

However, Coutinho's compatriot Lucas Leiva is available again after missing the trip to St James' Park to attend the birth of his second child.

Despite having a near-fully fit squad to choose from, Rodgers is wary of the challenge posed by West Brom - who have won four of their last five Premier League games against Liverpool.

"They've been to Old Trafford and won, so they're a dangerous team and we know from our experience last year that they are a threat … they've got some really good players," he said.

Clarke, meanwhile, has revealed that on-loan Manchester City winger Scott Sinclair will not make the trip to Anfield due to a hamstring problem.