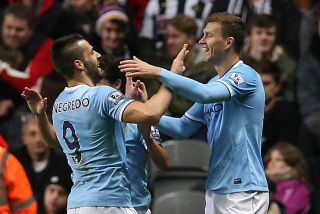 Manuel Pellegrini's men sit six points off the pace in the Premier League as they seek to regain to the title they won in 2011-12.

Last Sunday's defeat against Chelsea was City's third of their league campaign, although they did bounce back with a 2-0 League Cup win over Newcastle United on Wednesday.

They now take on a Norwich side struggling in the relegation zone after three games without a league win.

The onus will likely be on striker Sergio Aguero to deliver the goals, with the Argentina international having scored seven times this season, and four times in as many games against Norwich.

Still, Norwich did take all three points from the Etihad Stadium on the final day of last season, winning 3-2, gaining revenge after City had taken a 4-3 victory in another thrilling encounter at Carrow Road the previous December.

Chris Hughton's men will have hope of causing City's defence problems on Saturday, with home captain and centre-back Vincent Kompany still on the sidelines because of a thigh injury.

Attacking midfielder Stevan Jovetic is a doubt after limping off in the victory against Newcastle.

Midfielder Robert Snodgrass is unlikely to play after sustaining a serious head injury in a 4-0 League Cup loss to Manchester United on Tuesday, while Elliot Bennett (knee) and Alexander Tettey (ankle) are unavailable.

But, despite a high number of prospective absentees, manager Hughton is hopeful of replicating the result that they achieved in May.

"It was a really good occasion and a great performance and result," he said.

"You're always looking for plusses and ways in which the team can be motivated. We know our performances haven't been bad, but we haven't had the points to go with our performances. That's the reality.

"Nobody will deny that it's a tough ask but you've got to go there and be delighted by the challenge, and you've got to be excited by it too."