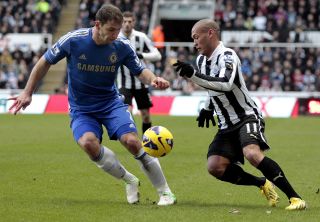 The Portuguese managed Chelsea in three top-flight fixtures at Newcastle during his first spell in charge at Stamford Bridge between 2004 and 2007, but collected just two points from those visits.

However, the former Real Madrid boss is likely to feel upbeat about bucking that trend this time around, as his men head to Tyneside having won their last six games in all competitions.

Chelsea have lost just once in nine Premier League matches this season - their 1-0 reverse at Everton in September - and go into this encounter joint second in the table after Fernando Torres' injury-time winner gave them a 2-1 win over Manchester City last Sunday.

And with leaders Arsenal facing second-placed Liverpool in Saturday's late kick-off, a fourth consecutive league victory could see Mourinho's side finish the weekend top of the pile.

Torres' strike against City was his third goal in his last two games and the Spain international forward looks set to lead the line once again for the Londoners.

Mourinho made 10 changes for the midweek League Cup win at Arsenal and has no new injury concerns, with Marco van Ginkel (knee) his only long-term absentee.

In contrast to Chelsea's recent form, Newcastle go into the fixture having won only once in their last five Premier League games.

Alan Pardew's side will be keen to bounce back from the disappointment of losing the Tyne-Wear derby at Sunderland last Sunday, but have taken maximum points from just one of their four Premier League home games so far this term.

However, Newcastle ran out victors in the corresponding fixture last term, as Moussa Sissoko's double inspired them to a 3-2 success over a Chelsea outfit managed by Rafael Benitez.

Pardew will have to overcome something of a defensive injury crisis to repeat that feat, though, as Paul Dummett (hamstring) has joined Massadio Haidara (hamstring) and Ryan Taylor (knee) on the sidelines.

Captain Fabricio Coloccini (groin) and Steven Taylor (hamstring) are also doubtful, although Mapou Yanga-Mbiwa returns from suspension after missing the defeat at the Stadium of Light.