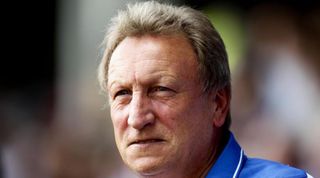 The sides meet at St James' Park just three days after Warnock was confirmed as the man to succeed Tony Pulis.

Pulis left Palace on the eve of the new Premier League season amid a reported disagreement over transfer policy, before the club's hunt for a new manager encountered numerous stumbling blocks and controversies.

But Warnock was eventually settled upon to take Palace forward, having guided the club to the Championship play-offs in 2008 before leaving for QPR in 2010 as administration gripped Selhurst Park.

And the 65-year-old believes that Palace's team spirit will prove to be a key factor in their battle for top-flight survival this season.

"They're a good group of players, they work hard for each other, so the sooner I can get cracking the better," he said.

"Last year epitomised that. You can't do anything without team spirit and I think they had it in abundance.

"We've all got to work hard to get that resilience again, get that clean sheet mental attitude and the lads up front have got to be a bit freer and take a bit more responsibility to try and score more goals.

"It's an adventure we've all got to go into now without fear and enjoy it."

Newcastle manager Alan Pardew - a former Palace player - has backed Warnock to succeed at a club his side are scheduled to meet twice in the space of a month.

"He's been a manager of Palace before, so he knows the club," he said. "I think it's probably a good signing for them in terms of experience.

"We meet them in the [League] Cup as well, so we will see his reign close hand. His first and maybe fourth or fifth game."

Warnock faces a difficult first match in charge, though. Palace have not beaten Newcastle in their last eight attempts in all competitions, losing seven.

But the former Sheffield United and Leeds United boss will not be the only familiar face in the Palace ranks on Saturday, with Wilfried Zaha returning to the club on a season-long loan from Manchester United on Thursday.

The winger's arrival should provide an added boost to the squad, with Joe Ledley (groin) and Scott Dann (thigh) the only expected injury doubts.

Newcastle's Jack Colback will have a spring in his step after being called up to the England squad for the first time, but Cheick Tiote (hamstring) and Papiss Cisse (knee) are among the players who will not be involved.