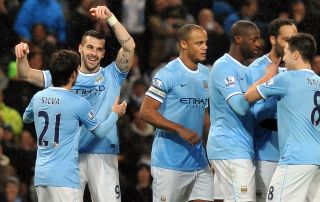 City, who sit second ahead of Saturday's fixtures, have an outstanding record against Newcastle in recent times, their last defeat coming in 2005 at St James' Park when a goal from Michael Owen gave the Tyneside club a 1-0 win.

Since then City have continually piled misery on Newcastle and will be confident of taking all three points from a team they have already beaten twice so far this season.

Manuel Pellegrini got his reign at the Etihad Stadium off to a flying start with a 4-0 home victory over Alan Pardew's side in his first game in charge, although the 2011-12 Premier League champions were made to work harder for a 2-0 League Cup triumph at Newcastle in October.

Victory this weekend would see City leapfrog leaders Arsenal, who are not in action until Monday.

Striker Sergio Aguero is again set to miss out because of a calf injury, but City have been handed a boost with the news that Yaya Toure, Jesus Navas and Micah Richards are all fit to play.

The presence of Toure could be key to City's fortunes. The Ivory Coast midfielder has brushed off the ankle injury he sustained in Wednesday's 6-0 League Cup win over West Ham and will be targeting more goals after scoring four times in his last four Premier League games against Newcastle.

Mathieu Debuchy serves the second game of a three-match ban for Newcastle, who will also be without captain Fabricio Coloccini (knee) as they aim to avoid a fourth consecutive defeat.

A win for Newcastle could see them move above City's local rivals Manchester United and the hosts will be encouraged by the prospective returns of midfielder Yohan Cabaye and goalkeeper Tim Krul, who both missed the 2-1 FA Cup loss to Cardiff City.

However, Pardew may be forced to reshuffle his defence further due to a thigh injury that could keep left-back Davide Santon out of action.

Pellegrini's side have scored 57 goals in 20 league matches, but only a third of those have come on the road.

Newcastle are seeking a first home clean sheet since early November, when Chelsea were beaten 2-0.